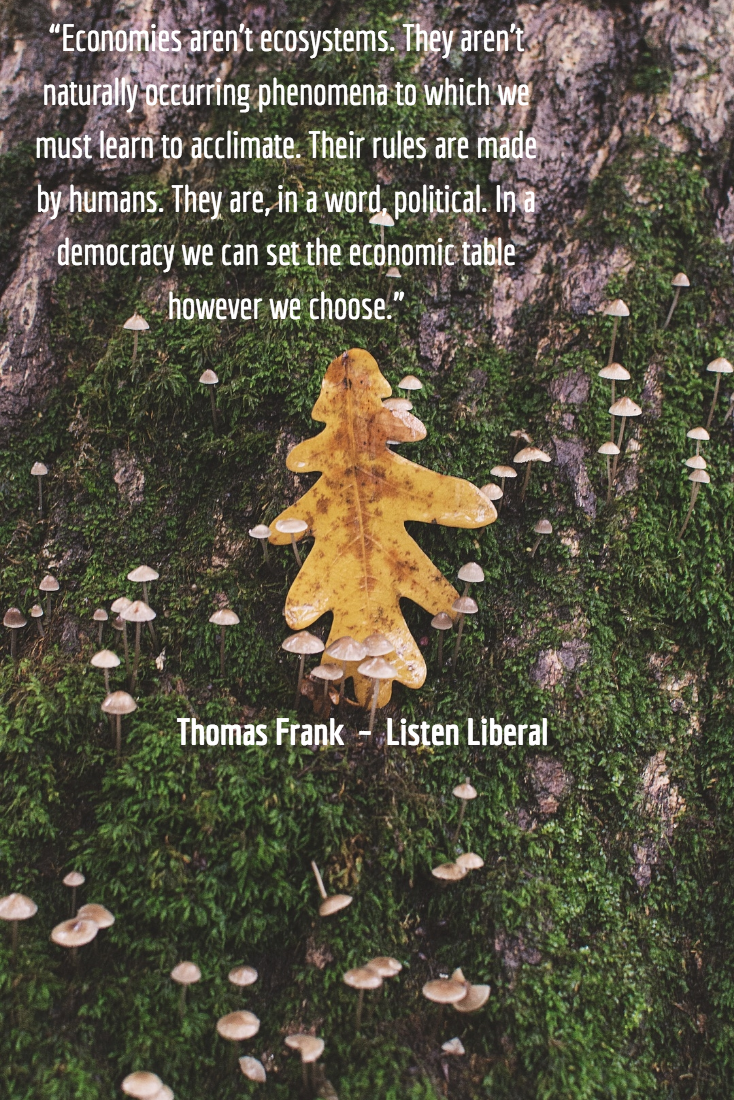 I have begun listening to Thomas Franks’ latest book, Listen Liberal.  The quote above really stood out.  I modify it below. 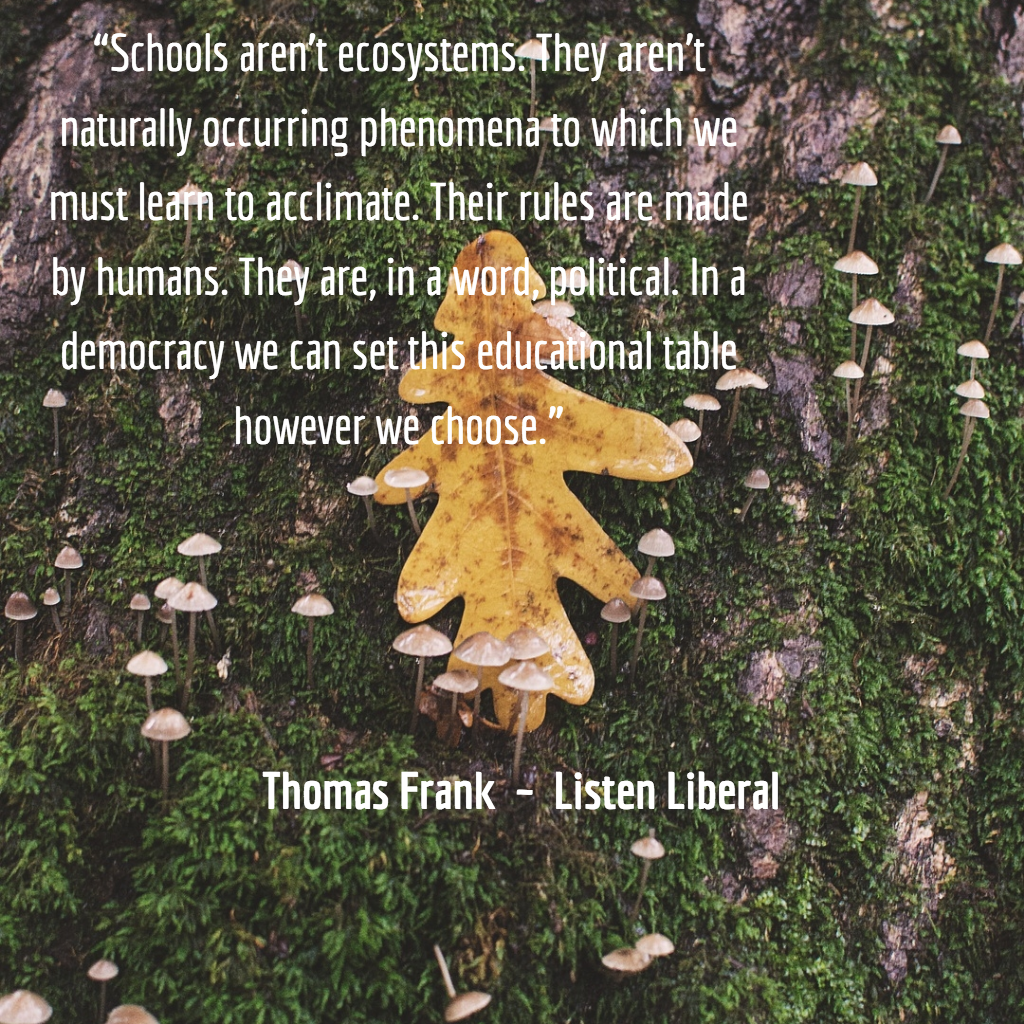 I am having to rethink my own analogizing here in light of this.  I have been very fond of calling on myself and teachers to devise ecosystems where our students can learn.  Are institutional systems (aka schools) ecosystems? Are learning systems ecosystems?

I am beginning to lean toward a post-school view of learning. In that view I am thinking that the role of the teacher is one of enabling the pre-existing affordances of the mind and body of each learner.  Impossible, yes?  The learner’s mind is the only ecosystem worthy of being considered as complex in Dave Snowden’s sense of the word.  Everything else is political and middle-management.

I am driven to this conclusion in part from my experience in a teacher meetup this weekend on my university’s campus and at our ed school’s main building.  I attended four sessions and presented on use cases for three annotation tools: Hypothes.is, NowComment, and Vialogues.  I have not been a K-12 teacher for ten years although I have kept in touch with what is happening there by my connection with the Western Kentucky University Writing Project as a tech liaison.  I was shocked by what I was hearing.

My presentations had nothing to do with surveillance, did they?  Maybe every technical tool I am using contributes to the surveillance state.  If it leaves a digital trail, if it is owned by someone else, if it sets the terms of service (and non-service), then I can hardly claim to be any better than those I critique.

Schools are not ecosystems.  They are political systems.  Ecosystems deal in life, death and all the passings back and forth between those two states. Ecosystems seek balance. Schools do not have feedback loops even though they exist within larger feedback loops.  For schools, change is anathema or at least to be resisted. I am hard pressed to think how they have the same self-correcting micro, macro, and mondo rules that nature has. Even in their most legible forms, schools are not dumbed down natural systems. They are unnatural. They are political.

I am disturbed that this has not occurred to me before now. Anyone working within that political system is a political animal first, foremost and always.

I want to be a teacher first and a political animal at best a very distant second.  I want to work with the real learning ecosystem that is as unique as it is ubiquitous–the learning ecosystem Marvin Minsky called ‘society of mind’.  One human mind connecting to the world, needing help and being helped as best one can with another helping mind. 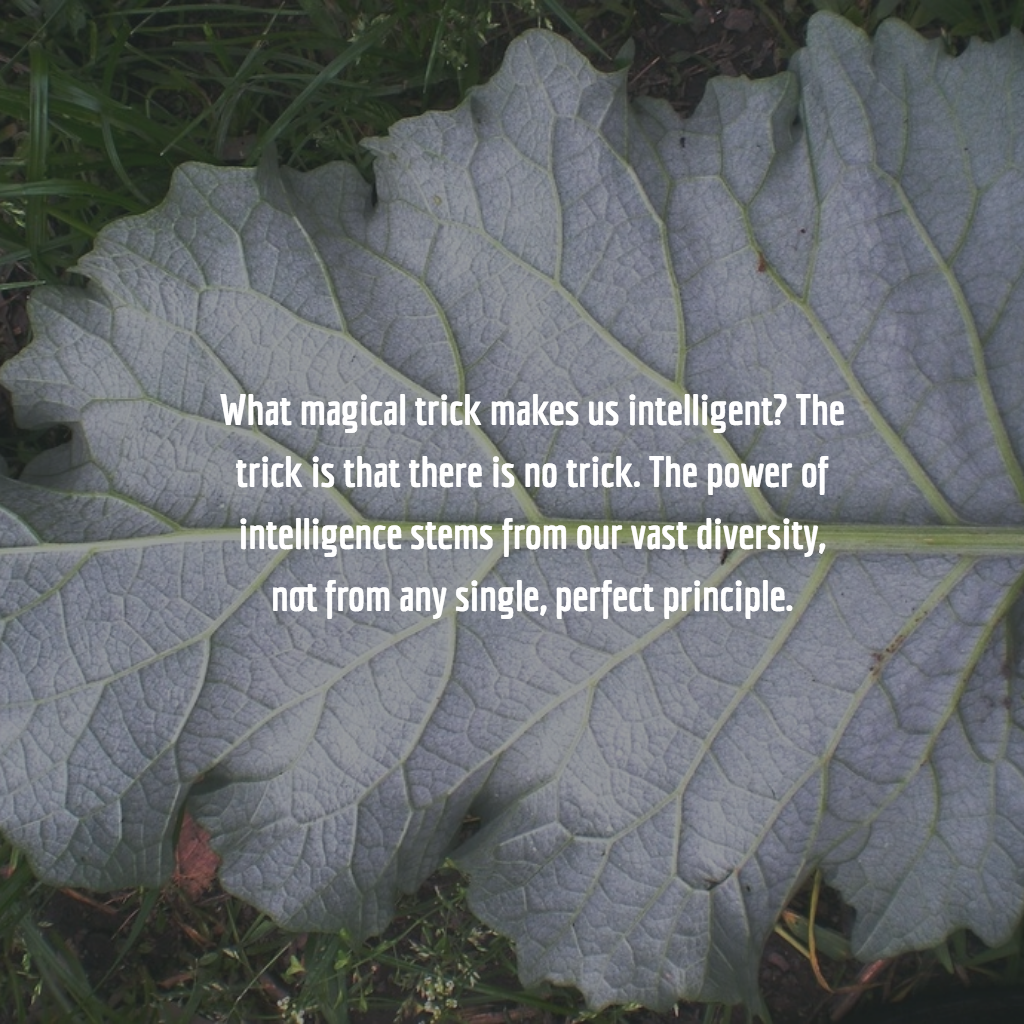 Someone with a helping mind–that is my definition of teaching.  Not a magic trick.  Minsky puts it best at the finish of the Society of Mind. The text block is long, but amazing. Please read and annotate, too.

How could anything as complex as a human mind work so well for so many years? We all appreciate those splendid feats of writing plays and symphonies. But we rarely recognize how wonderful it is that a person can traverse an entire lifetime without making a single really serious mistake — like putting a fork in one’s eye or using a window instead of a door. How do we do such amazing feats as to imagine things we’ve never seen before, to overcome obstacles, to repair things that are broken, to speak to one another, to have new ideas? What magical trick makes us intelligent? The trick is that there is no trick. The power of intelligence stems from our vast diversity, not from any single, perfect principle. Our species has evolved many effective although imperfect methods, and each of us individually develops more on our own. Eventually, very few of our actions and decisions come to depend on any single mechanism. Instead, they emerge from conflicts and negotiations among societies of processes that constantly challenge one another. In this book we’ve seen many such dimensions of diversity:

The accumulation of myriad subagents. We learn many different ways to achieve each kind of goal. The many realms of ordinary thought. When one viewpoint fails to solve a problem, we can adopt other perspectives. The endowment of several instinctive protominds. We embody different kinds of organizations for achieving many kinds of goals. The hierarchies of administration grown in accord with Papert’s principle. When simple methods fail, we can build new levels of organization. The evolutionary vestiges of animals that still remain inside our brains. We use machinery evolved from fish, amphibia, reptiles, and earlier mammals. The sequence of stages of the growing child’s personality. We accumulate different personalities that we can apply to different situations. The complex, ever-growing heritage of language and culture. We can use methods and ideas developed by millions of our ancestors. The subordination of thought processes to censors and suppressors. We do not need perfect methods, since we can remember how imperfect methods fail.

Each of these dimensions gives you toughness and versatility. They offer alternative ways to proceed when any system fails. If part of your society of mind proposes to do what other parts find unacceptable, your agencies can usually find another way. Sometimes you merely need to turn to another branch of the same accumulation. When that fails, you can ascend to a higher level and engage a larger change in strategy. Then, even if an entire agency should fail, your brain retains earlier versions of it. This means that every facet of your personality may have the option to regress to an earlier stage, which already has proved itself competent to deal with the usual problems of life. Finally, when even that won’t work, you can usually switch to an entirely different family of agencies. Whenever anything goes wrong, there are always other realms of thought.

Fish. Regression to an earlier stage. Families of agencies. Censors and suppressors.  This strange conclusion sounds true, inconceivably unlike most offered from the tech-solutionist wonderhole I fell into the other day at the meetup. Forgive me. Understand. I have clearly run out of map.  It is the beginning of the end of that world. The pirate in me thinks, “Thar be what now? Aye. Set sail for beyond the end of the world.”