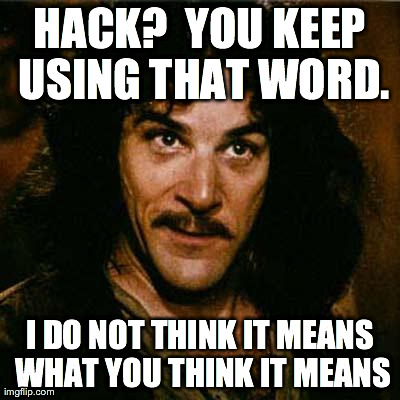 But, in a collegial spirit, let’s play with the word for a bit, just as my (h)academic colleagues do.

There is a reason why the word ‘hack’ is suspiciously violent. For instance: “Don’t get your hackles up.”  “Hacking our way through the jungle. “She’s such an academic hack.” “Hackers hacked my Twitter account.”

Hacking has a violent legacy embodied in it. According to the OED its earliest use was to describe a type of tool- a pick, or what we call in my neck of Kentucky,  a grubbing hoe or mattock. One of the entries from 1851 called it a “heavy and obtuse-pointed pick”. You might argue that the word was the embodiment of heavy labor.

The word gradually morphs into a more specialized tool for cutting channels into wood. It jumps over at some point to refer to the wound caused by these tools in wood and then more generally to human wounds. But wait, there’s more.

It is used to describe a hesitation in speech, a short cough like smoker’s might get, an exploratory blow at something, to be angered with someone, to tolerate, to gain unauthorized use of. It is a multi-tool word always with the whiff of action and anger about it.

That brings us to this week of ‘hacking’, especially hacking our own writing. There are not many traces of this etymological legacy in the use of this word on #CLMOOC this week. If anything, ‘hack’ has been reduced to the role of synonym for revise.  This fork in the word from its emotional roots reminds of Descartes’ dissection of the head from the heart–to the detriment of both.

To explain this better, I refer to Michael Gee and a video of his I have been returning to all week. In it Gee asserts that learning is best done through the body first, if possible, then through words only after. He points out that if you are reading a manual for an unfamiliar video game (insert any manual here) it will likely not make a great deal of sense. If you will just go ahead and embrace the game and play it without fretting about the manual, you will likely screw up a lot at first. You will fail a lot much like you do when you learn to ride a bike (only without the skinned knees and the dangers of trucks killing you). If you return to the manual after some of this ’embodied learning’, then the verbal stuff there will magically make more sense. Why? Because you have situated the learning first where it is done best–in the body.

I think this applies to the kinds of hacks we have been exhorted to do this week. I feel that the idea of a hack must already be felt in the body before it is understood (and realized) on the page or in any medium. And there must be some ‘violence’ felt to the self, some subversion of that identity, for us to hack our own writing.

For me that means taking something already done and refeeling it, re-embodying it. This is extremely difficult to do to my own writing, but am able to do that with others’ writing.  For example, I trust that I am doing this when I go through the process of creating ‘zeegas’. Zeega is a remix tool that allows you to take animated gifs, photos, text, text effects, and sound (music or environment) to express something, anything. The translations I make are as true to their originals as I can make them even though they tend to be hotter emotionally. I don’t view them as hacks. They are more like a train running on a parallel track to the original. But there IS a hack going on when I make a zeega.

This hack is the process I go through to get to the product. And there certainly is some new energy (violence?) in that process. The zeega process asks that we come to terms with how new media work together and separately. The music I pick oftentimes has no lyrical connections to the text I am translating. So I have needed to embody a new sensibility,  constantly comparing the feel of the music to the feel of the words I am translating. The same applies to the animated gifs and the text effects and the fonts and all the other pieces that go into the process of making that whole.

What I am embodying, what I am hacking is a new way of looking at the constraints, affordances, and adjacencies of this new tool. It feels like I am hacking with this tool just like miners must have used their hacks to dig and delve and do. Crude, but necessarily so and effective in getting the work toward being done.

I think that most writing hacks don’t add much to the energy in the original and hence aren’t really hacked products. And I am not making a quality judgment here.  Hacked stuff isn’t better on its face than unhacked stuff.  Hacking is just another way in, perhaps a forced entry even.  For example, when Kevin Hodgson asked us to hack his comic, I don’t think the results were hacks. There were ‘rules’ already established as to filling in the comic’s speech bubbles. It was a great idea and got lots of uptake. I can see lots of uses for the game in the classroom and the training setting. It isn’t a hack and playing it by the rules isn’t a hack. What I did WAS a hack. I put the original idea next to Zeega and commenced to do some serious violence to the original. In some ways the product is the same as what everybody else did, but the way I got there, was by hacking of the original directions. That,to me, is a hack. And that hacking requires a significant portion of re-embodying the original idea much like James Carse talks about in his definition of the infinite game.

Another example is from Susan Watson’s exemplary post on her struggles with the word “hack”. It’s exemplary because there is no air of presumption about her work. There is only a need to clear the air and explore the processes and products of hacks.  She is definitely laboring in the vineyards for us all. You need to read her post and watch the two video examples and comment. She has made herself very vulnerable, she has asked the essential questions, and she has come to terms with the word hack. We should reciprocate. My comment went like so:

I like how you trust your audience more in the second video. Although they are both videos the first one is really a pretty straightforward narrative line carried by the 3X5 cards as chorus. The second one has ‘wormholes’ in it that carry us back a forth across the narrative timeline. That sentence is pretty much academic BS, I fear, but it really comes down to a couple of ‘things’ for me. 1. Does if feel subversive? 2. Is it the process that is being hacked or the product? In the first case you are the sole judge and you should ignore the comments. In the second case I feel you took the video making process and used it to subvert the story in version #2…. Your questing, uncertain, whistling in the dark movement back and forth is authentic. It is what Dante spoke of in the first Canto of The Inferno as living in the dark wood of error. If you know what you are doing every step of the way, it ain’t hacking. If you know why you are doing it and that reason puts you at odds with yourself and others, that is hacking. So that leaves the question yet to be answered. Which are you wearing a black hat or a white one? Or is it gray? Or patchy? Or yin/yang?

I could go, but this post is already well past the tl;dr barrier. If you have gotten this far, you know how I feel and how limited my thinking is on this already. Suffice to say, I am trying to hack my own writing, a poem. And I am not pushing it through someone else’s ‘transform’ to be extruded into another vaguely familiar form. It is not a revision, but I am trying to re-feel the sources of the poem as provisional again. I am trying to re-embody the verbiage so that I can feel it again. Perhaps that is the ultimate hack, cannabalizing the wreckage of our selves through our writing into new identity. If you want to have a crack at cannabalizing it, here it is.