Susan Watson’s dark-backgrounded blog has more light in it than a magnesium road flare. Her latest incendiary has ignited some tinder in my memory, Kenneth Grahame’s The Wind in the Willows. Especially Chapter Seven–“The Piper at the Gates of Dawn”. That is why I have music at the beginning and end of this post. Music succeeds as a way beyond words and toward connecting better than almost anything else I know. So John Hiatt (at the beginning) and Dr. John (at the end)are my pipers as I write into the dawn.

The connection I made with Susan’s post, “Needle in a Haystack”, was through the mediation of my best friend in annotation, Diigo. I have used Diigo since 2006, but rarely have I found a convivial crowd to play with the group annotation function. And by rare I mean never. There is just enough ‘friction’ in using it for folks to say, “It’s fine as a social bookmarker, but I just don’t know about annotating as a group. Too damned messy.” Aye, I admit, ’tis messy. And sometimes folks erase your good works. And it can be a bit ‘hincty’ to use (in the idiom of my Kentucky comperes), yet it remains the best of what for most part is a bad lot–at least in a convivial sense. I started reading Susan’s post with an eye toward a group annotation much like we recently did with Mimi Ito’s sweetly vulnerable post about the terror of real connection on the net. And then it took a turn. Or rather my memory took a turn with her text. All of the sudden I was with Ratty and Mole floating down the river in a johnboat looking for old Otter’s doted upon youngest child, Portly. 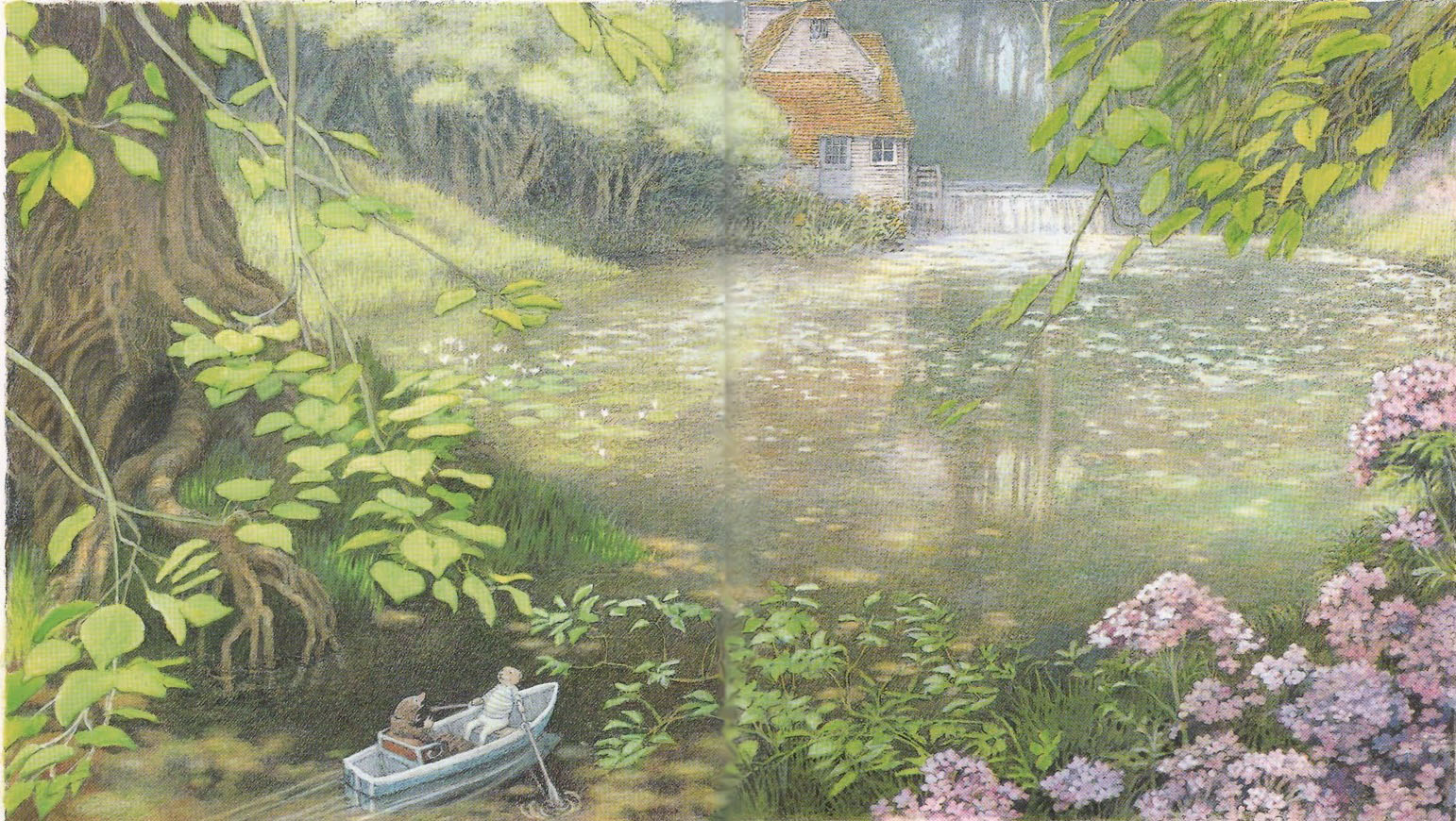 Susan mentions inspiration and its word origins especially their connection to the gods. (My annotations are in italics.)

I am thinking of Pan here.  You know…the panpipes.  i have such wonderful associations with this word because of The Wind in the Willows. The very title of Grahame’s book is a reference to Pan and the gods of otters and water rats and moles and badgers and toads. I read this book over and over to my children growing up.  I want Chapter Seven to be read aloud to me as I die. It is titled “The Piper at the Gates of Dawn” –Pan, the source of all inspiration, speaking to use through the wind in the willows at the gates of dawn.

I am inspired here to suggest that your blog like every loved thing or space has a genius loci, a Pan of its own living within like the little island in the middle of the weir in The Wind in the Willows.  Your work is to give it room to breathe out that inspiration, to be another’s wind in the willows.  There really are undiscovered connections everywhere.  Holy digital spaces that we believe in because others do and because we do.  Inspiring, breathing in, like the zephyr at dawn. Sweet and wild and impossible to word.

She goes on the hint rather loudly “the fact that something bigger than “us” is at play here.”

Yes, in teaching I yearn for these moments where the artifice fades away, the planning drops off, the dross of the past is slagged off and a new presence is born.  We become the pipers at the gates of dawn if only for a few moments and the seeming chaos of improvisation, of taking our lead from the pipedreams in the ayre, becomes impossibly logical, a transcendent logic.  And no wonder we are called ‘touched’ because we damned well are.  And the world in these times makes abject sense, abject in the sense that wonder and awe always cast off sense.

She remarks on Simon Ensor’s utterly remarkable (and readable, so hie you to them) posts on the hidden and accessible better angels of our nature here and here and here. And in a throw away phrase at the end she asserts that after you read Simon you will “get the idea”–a kind of “the rest of the exercise is left to the student” moment for me.

We get the idea because it is a river that passes through this familiar yet undiscovered country.  We all come to it through teaching for whatever reason. Teaching flips the switch that allows us to see the light that “grows and grows” in Wind in the Willows.

“Mimi’s post was added to the Diigo group so we could all jump in and annotate.” In the light of dawn and with my friends Ratty and Mole and Susan and Simon I respond:

Mimi’s post is just a little rowboat, a place to put the hamper as we search for Old Otter beloved youngest child along the river banks.  (Please read Chapter Seven of Wind in the Willows here. ).  Not to put too hyperbolic a point on it–we really are  rescuing children from the leg traps and snares of the world when instead we should be taking them to meet the pipers at the gates of dawn.

Mimi’s post resonated with Susan -made her laugh. I resonate, too.

If you love words, you’ll love ‘resonate’–I think it is directly analogous to the word recursion. Where recursion is tied to vision, resonation is tied to the ear. It is not an old word at all according to the OED.  it is a science word. Many disciplines use it. To re-sound, to be a re-sounding board, to echo back and forth.  It is like the empathy of mirror neurons.  It is memory and the experience of shared discipline and questions and ranging out into the world.  We are all looking for someone’s lost child.  We have all found Pan at the Gates of Dawn.  Hence, the resonating chord stretched between us and only felt as it vibrates, akin.

She sluices down the word ‘amalgamation’ to try to explain the apparent ubiquity, even multiplicity of her connected friends.  (Personally, I am thinking Robert Johnson at a crossroads making a pact with Old Scratch, but that is just idle and envious speculation on my part.)

I think that we skirt around the issue of how we go beyond an “amalgamation” when we lower our gates and release the bloody-minded wards of routine. We really are Kevin and Mimi and Maha and Alan (well, maybe not Alan 😉 ).  I think they are our fractal selves. Is that nuts? Is that perhaps lowering the prison walls a bit too much?  None of us is free.  We are all tied to each other.  If one goes down, the rest of us will be pulled down the mountain. Do I really believe that as more than a damned abstraction?  Sometimes.  At the best of times.  All the time? I just gotta keep working that garden.

Susan’s  is a post no one can say they didn’t read because it was too long.  Nor is Diigo so hard that you cannot get back your investment of  time and energy in no time flat. It is all about play.  My post is written in play at the dawn of a new Sunday.  We are all afloat in the same boat and on the same river and at play.    I feel alive to Kenneth Graham’s words in the mouth of the oh so wise Water Rat who is hearing Pan’s tune in the willows.

“‘Now it passes on and I begin to lose it,’ he said presently. ‘O Mole! the beauty of it! The merry bubble and joy, the thin, clear, happy call of the distant piping! Such music I never dreamed of, and the call in it is stronger even than the music is sweet! Row on, Mole, row! For the music and the call must be for us.’

For whom does the piper pipe? He pipes for thee. Let Dr. John pipe us into that new dawn.